“You cannot separate music from tennis. You can’t, because they’re deeply connected. There is always rhythm in what you do, especially if you’re a tennis player or, in general, a top-level athlete. There is rhythm in the way you breathe, in the sound of your footsteps when you play on clay, when you attack the net. Close your eyes and try to imagine those sounds…. They are ta-ta-ta, they are the shoes sliding on the ground…. On the court, the rhythm continues to be part of you, starting with your heartbeat.”

Yannick Noah first moves gently, then incisively rotates his hands as he imagines chords and notes experienced under the net. He seems to speak of musical scores, rather than centre courts. He seems to speak of musical keys, rather than volleys. He’s still tall, tapered and smiling, despite his 62 years. He propagates gusts of Marlboro Gold and mystical kindness on the Aspria Harbour Club’s Milan balcony, letting deep thoughts and associations flow, spreading them in front of amazed listeners.

The timeless iconic man and ambassador of Le Coq Sportif decided long ago to change his handle, dedicating his exotic flair to the mic-a momentous transition that has unexpectedly led him to the heights of international charts and Spotify rankings. His reggae songs, launched back in 1991 with the first album ‘Black and What!’, speak of positivity and beauty, sharing and humanity, and above all, freedom. The same freedom theorized by his leading example Bob Marley.

“I’ve just finished my 13th album. My will is to always be real, honest to myself and to my listeners. When I started singing, probably 99 percent of people thought I was crazy. However, they often don’t realize how important it’s to listen to your soul, to its needs. It all happened by accident, in the early 1990s, when I found myself inside a recording studio and a singer didn’t show up. During that day I started playing with words a little bit and the producer immediately asked me to go on, then he recorded me and just a few weeks later I was shooting the video clip of my debut song. After tennis I could’ve gone down a long series of canonical paths: I could’ve opened a tennis store, just been a coach or a commentator…. But my instincts pushed me to do something that would help me as a human being. And music was that something.” 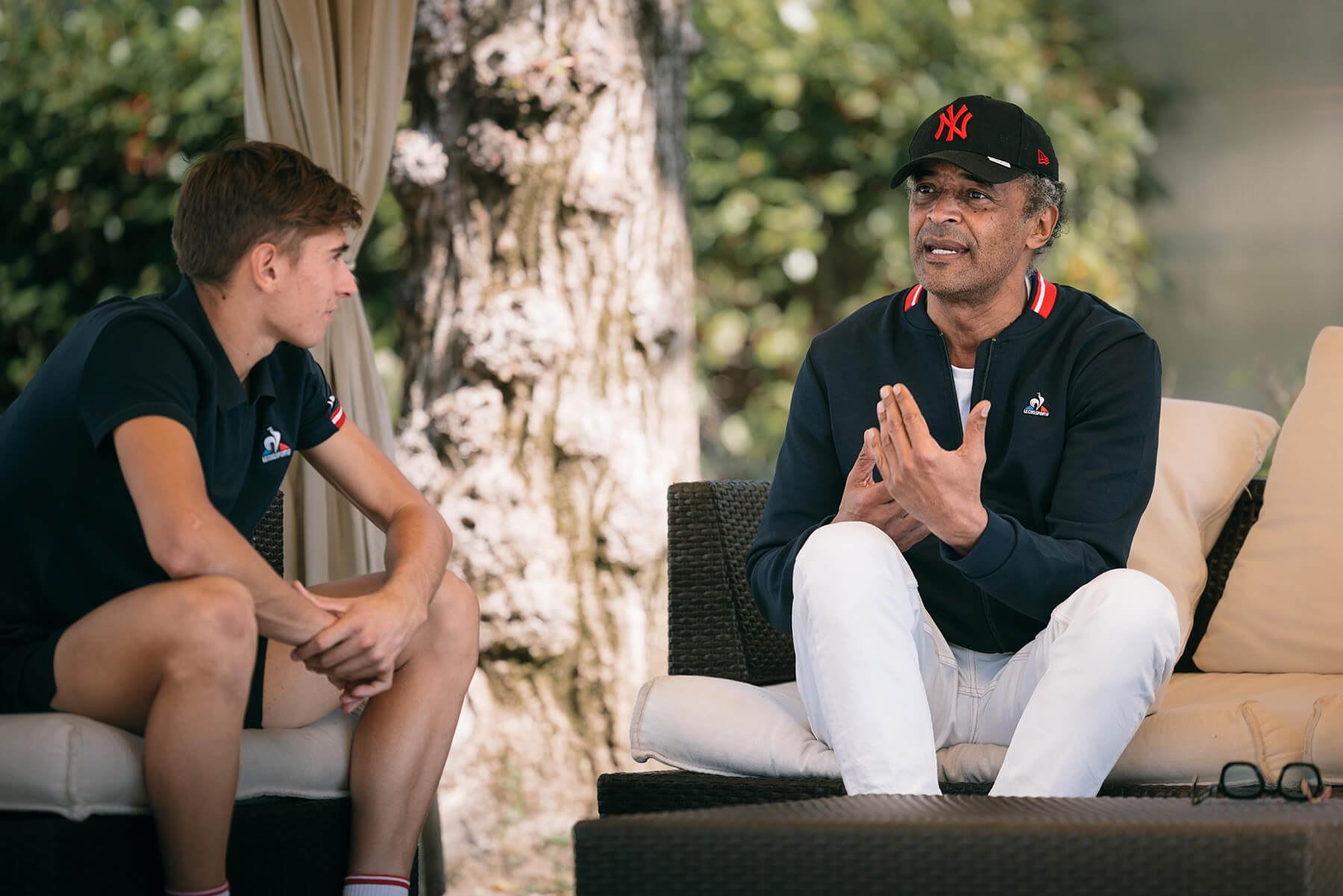 Music as an inner voice. Music as an emotional loop during every practice and final, as a soundtrack that, implicitly, punctuates accomplishments and failures. Music as vocation, as essence, as gravitational center. Noah talks to us about all these facets, about how notes have always been part of his life: melodic footholds capable of changing in time and space, of accompanying first exaltation, concentration, introspection, then personal liberation. Jumping from chapter to chapter, from experience to experience, the Sedan native emphasizes the infinite functions of this art form, focusing on the most relevant: the therapeutic one.

“Music gave me freedom. I worked for years with psychologists who instilled in me the concepts of strength, power, aggression and killer instinct: fundamental factors for being a top athlete. When you stop your sports career, however, those strengths turn into weakness, into negativity. Music saved me during that transition. In front of the notes, lines and restrictions magically vanished, I immediately realized that I could be sensitive, weak, that I could hesitate and cry. When I was a player most of my life was rock, on the court I had to be Mick Jagger and the Stones, AC/DC and the Who, I had to channel that energy into the racket. At that time I had a very deep relationship with my cassette tapes, I listened to music all the time. The tournaments coincided with moments of loneliness, I was often melancholy, I felt very distant from family and affections…. Music was my traveling partner, it kept me alive. Then rock became reggae, it became the study of lyrics, of words, and out of nowhere it all spread out.”

So Noah started to color all his notes with cultural and emotional roots, with France and Cameroon, with emotions kept imprisoned for too long in front of millions of spectators: men and women enchanted by his dreads and his unique ability to modernise tennis. What’s important is to always find a positive perspective, is to unite, the Sedan native ecstatically affirms, is to divulge a love that is meant to be a collective paradigm for a new, utopian world: a world that is both near and far, a world that often appears in his lyrics.

“My roots are in France and Cameroon. Two very different countries. I grew up in a unique family: my father was a very funny African footballer, my mother a white European philosopher. I could see how much they loved each other, how close they were, how they shared the same humor, the same approach to an outside world that frowned upon them. This love fortified me, over time it made me realize that I had to play a particular role in the world: I had to make people understand that it’s okay to be different. I’m talking about skin color, body characteristics, birthplaces…. For example, I’ve always been a white person in Africa and a black person in Europe, but I’ve always lived this dual condition well because I was surrounded by love. It’s no coincidence that my first song is precisely about this topic: it talks about the relationship between Yaoundé and Paris, about the possibility of making these two cities, these two peoples, these two continents coexist in harmony. In my vision it’s all part of a great, virtuous process.”

And Noah’s process continues to pulsate, vital and incisive, like his tennis, like his words. It’s an ideological climb, begun by practical example in the 1983 Roland Garros, by floating between the backcourt and the net, by winning dozens of other tournaments and wiping away sweat and prejudice with an unforgettable green-red-yellow wristband. It’s a pacifist march, composed of rhymed steps and vocal bridges, destined to continue and take root in who knows what stage, what nation, what individual. It’s a melodic call for change, not meant to compel but to advise, not meant to force but to inspire.

“I did concerts in front of 50, 100 people. Many people wondered why. It didn’t make sense to them for me to sing in front of friends and family when I could do exhibition matches in front of thousands of spectators. Actually everything made sense, my life made sense. I felt like I had escaped the sports’ one-dimensionality. I felt that starting from scratch would allow me to be even more real in my approach to music. Sometimes I had no microphones and no electricity, yet it was natural for me to give a definite meaning to everything: it was a form of preparation, of purification, which now allows me to be a credible artist, to perform in stadiums, to let my listeners know that I love what I do. I love it viscerally. I’ve always told myself that it doesn’t matter to sell ten thousand records or to sell a million. For me it’s all about sharing thoughts, messages, emotions. For me it’s all about sharing the freedom that music has given me.”