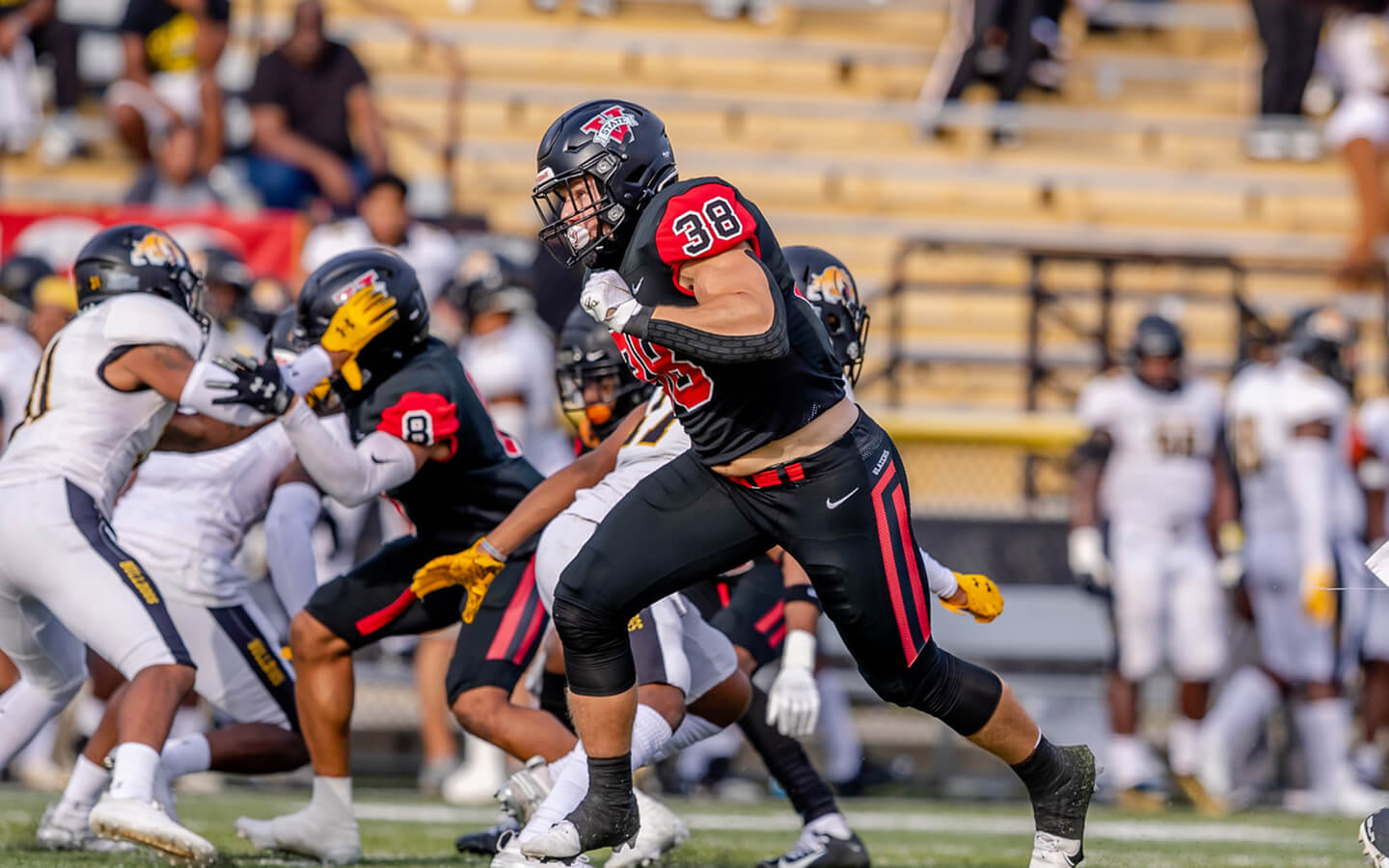 Julian Baldi defines himself as a ‘man on a mission’. All his actions, all his words confirm this self-induced condition, this transparent and never satisfied need to prevail in a context that should not be his world by nature, by origin, by territorial and cultural affinity.

Italian from Bolzano, Julian at the age of 23 is at the apex of his seemingly crazy journey in American football, a journey that today defines him as a linebacker in the defensive team of the prestigious Valdosta State University program. 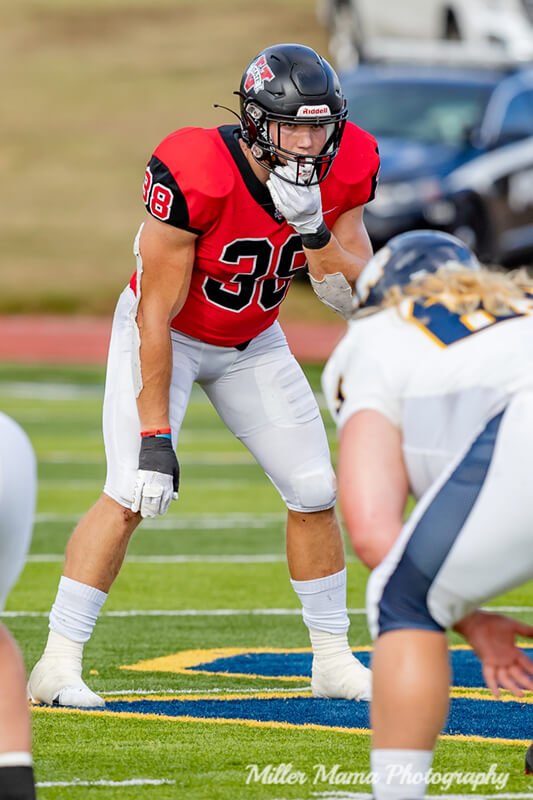 For over five years Julian has been an Italian explorer in an unknown cosmos, a pioneer who left the Bel Paese to put himself on the line, to pursue a passion that began by chance, a passion that Julian cultivated with the utmost seriousness, devotion and obsession: the passion for American football, for that oval ball and those yards that, across the Atlantic, represent a religious cult.

“I fell in love with football in a strange way, watching ‘The Longest Yard’. I was 13 years old and was already into the American Dream vibes, but that movie with Adam Sandler sparked something in me. I did some research on the internet and found a local team, the Bolzano Giants, and after a few years on the National Team I was called up for a match in Texas between the IFAF World Team and Team USA. On the grass of the AT&T Stadium I decided that I had to make the big jump overseas. So I started sending my highlights to different high schools and after some weeks I accepted the scholarship offered by Clearwater Academy. I arrived in Florida with a clear goal in mind. Ever since I got on the plane I’ve felt like I was on a mission, I still feel like a horse with blinkers on, I’m going straight forwards, I’m only thinking about working and improving myself. If in high school the goal was the collegiate scholarship, now it’s to win the national championship with Valdosta State and in the future who knows? Let’s just say that the NFL is a big dream…” 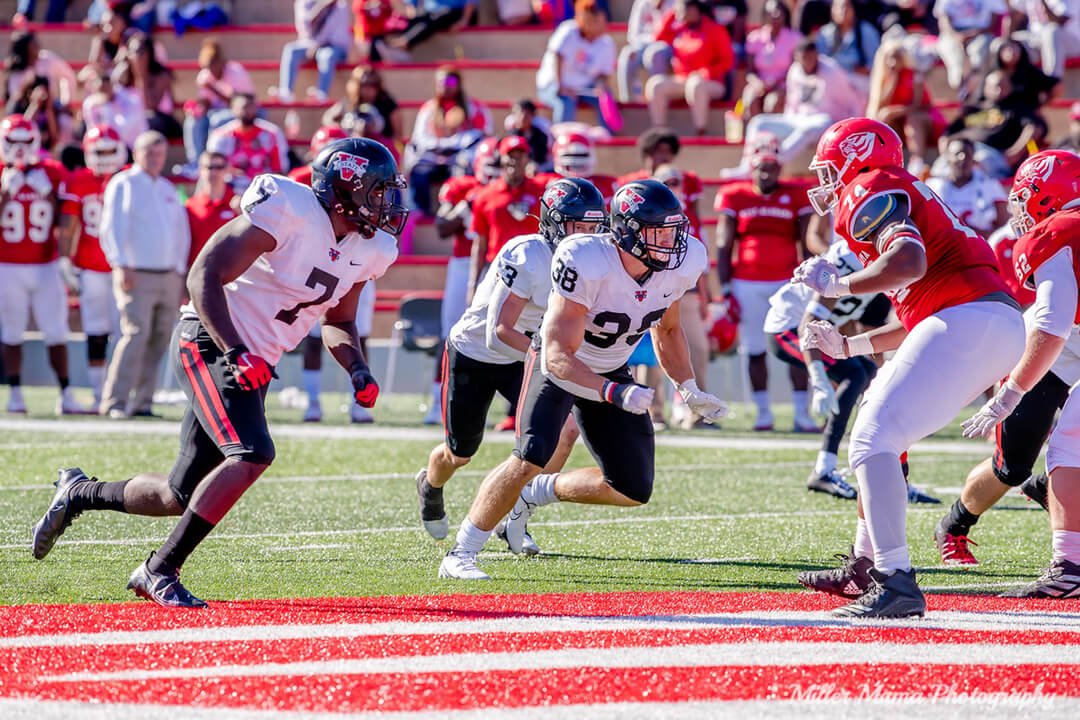 The NFL, an unreachable Olympus, unapproachable for those who grew up on provincial Italian fields. A barrier that until now has been broken only by Giorgio Tavecchio‘s kicks and, partially, by the gigantic size of Maximilian Pircher.

It is a long, long road that leads to the monumental American arenas and domes. A road fraught with obstacles and, above all, with contenders. A road that Julian has tasted in recent years, living on his skin the human and sports dynamics wonderfully described by the Netflix series ‘Last Chance U’.

“It works exactly like on that TV show. During the senior year in high school, only the most well-known prospects are offered college scholarships. Everyone else has to try to contact colleges. I was completely unknown and wrote emails to many, many universities. So I landed in a Junior College, Independence, which appears in a season of ‘Last Chance U’. These Junior Colleges are short-lived stepping stones, in two years they give you a chance to show off or fix academic problems and, after that, you can get into the emblazoned universities. The problem is that in those contexts the idea of  ‘team’ doesn’t exist: everyone plays for themselves, with the sole purpose of obtaining a scholarship and leaving elsewhere. I didn’t get any calls until the last weeks of Junior College, I thought my adventure was over, then came an incredible full scholarship offer from Valdosta State University. In the ‘Blazers’ locker room I immediately found a very different climate, now I feel like I’m living inside a big family”

And a family helps an individual grow both on and off the field: Julian has understood this well, and in America he has seen his South Tyrolean shyness metamorphose into irrepressible vital energy. ‘Juice’, this is his nickname in the locker room at Valdosta State, in reference to the amount of adrenaline released between the weight room and the field every single day. 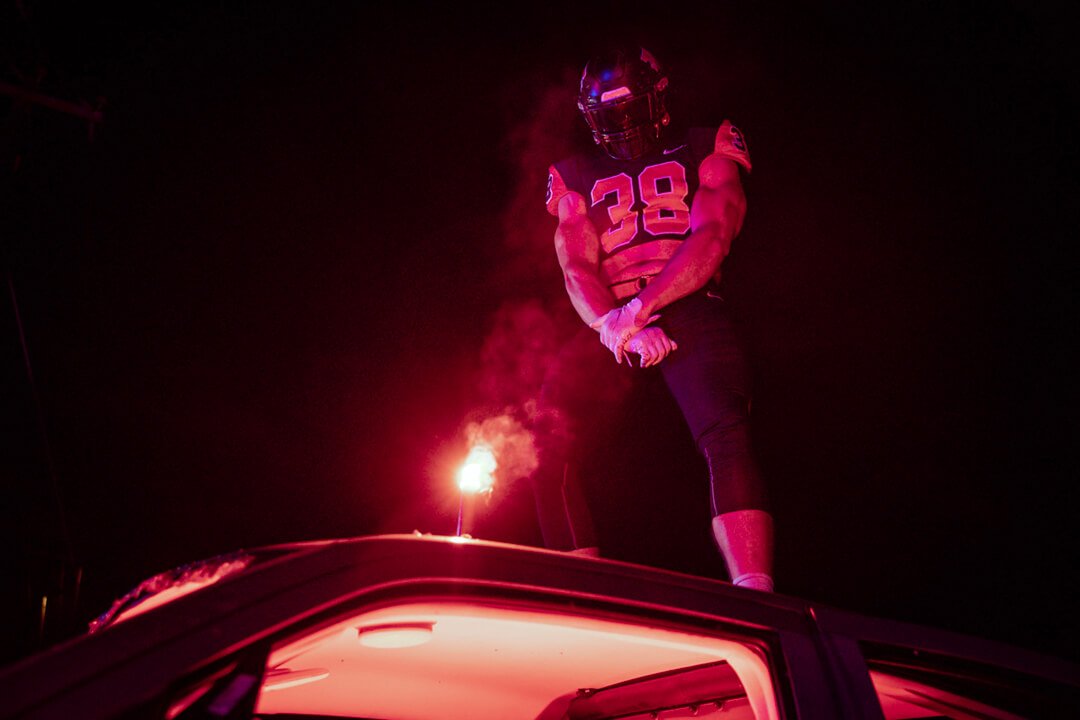 There are not only sacks and sweat, however, in the daily life of this athlete with a sculptural physique, furrowed by hyper-developed muscles. There are also school desks. That’s right, because Julian is a student-athlete who must secure academic results to pursue his athletic dream.

“I study Sports Science and have a very busy weekly ‘schedule’. Every half hour I have to do something: the day is divided between books, practices (at least two a day) and meals, I don’t have time for anything else. College football is like a real job, it is managed in an extremely professional manner. Every day you have to be at the top of your game, you have to compete with monstrous athletes…. Living this kind of ‘international’ environment is great, I have built a very close relationship with many of my teammates. I have to repeat this, they are my family here: a big family, we are over 120 people! I often ask my mom to remind me where I am, I realize that I need to take a step back, extract myself momentarily from the ‘mission’ and look at what I’ve done so far. I’ve already achieved a dream that I thought was utopian, but now I need to push on and keep chasing an even bigger dream”