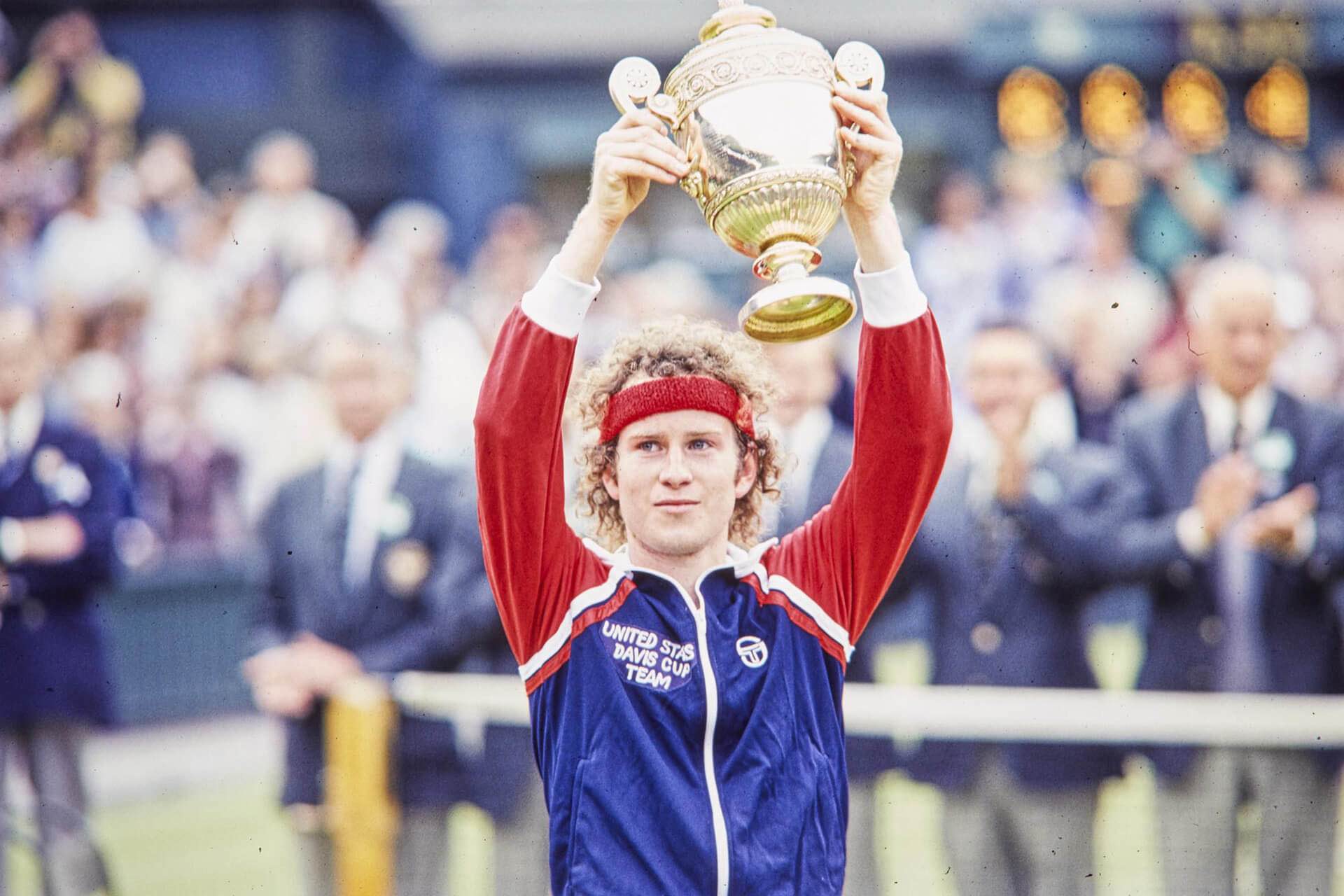 With his racket, he was artist and musician. Quite simply, he was the most creative player of his time

McEnroe was jazz. He was rhythm and improvisation. Virtuosity and imagination. The legendary Duke Ellington once said that “jazz has always been like the kind of a man you wouldn’t want your daughter to associate with”. Well, you could say the same of John McEnroe, at least, the first John McEnroe. With a left-arm blessed by some unnamed tennis divinity and a mind and temperament with broad expanses of unexplored space, his was pure, crystalline talent. He was irrational, in that unique way that only the talented few from the blessed, archaic ’80s knew to be. 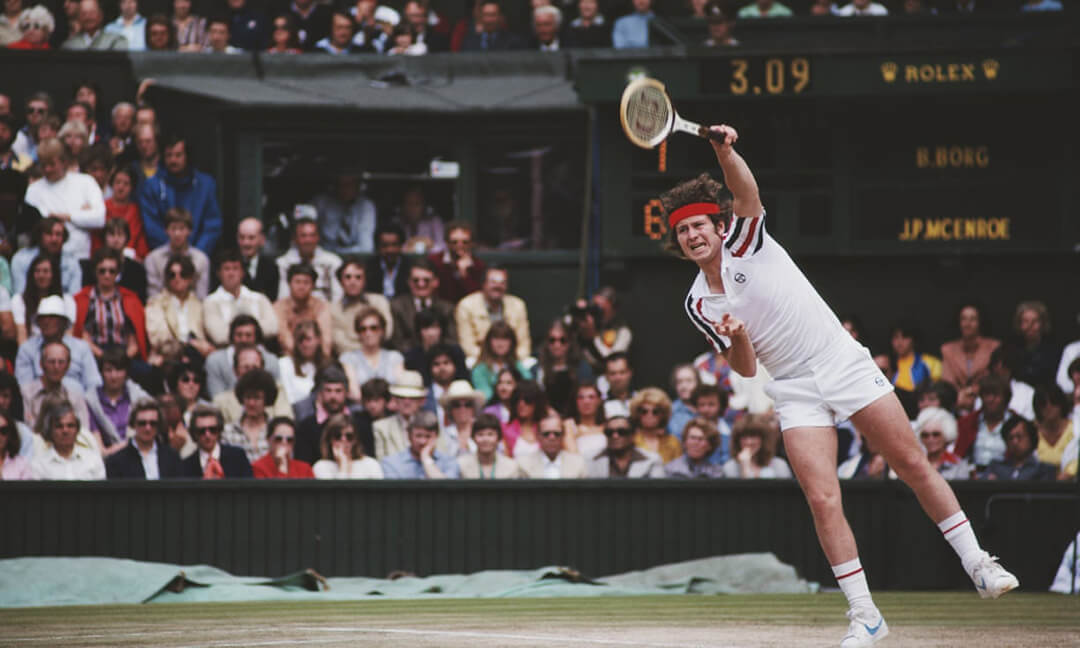 Born in the far off land of Wiesbaden, a spa town nestled in the heart of Germany, McEnroe never saw tennis as a priority. In all honesty, there is no inspiring moment or bolt from heaven; in the end, tennis came knocking on John’s door. “Sometimes I think I was pushed into something I didn’t really want to do…Tennis, obviously, turned out to be an incredible thing for me…but the truth is that I didn’t really want to pursue it until it just pursued me. Many athletes seem truly to love to play their sport. I don’t think I ever felt that way about tennis”.

His father was a hard-hitting, suit-and-tie figure in a New York law studio and his mother a shrinking violet/housewife. John grew up in a typical upper-middle-class household. In this house, he idolized Rod Laver, pilfering all of his mannerisms, and each and every tennis move from the Australian legend.

He made the most of that carbon-copy, exploiting their shared characteristics, starting from his physical build. Laver came in just under a meter-seventy, and McEnroe (stuffing his shoes) managed a few centimeters over. He also stole the grip and fondness for wild serves and volleys from the two-time king of the Grand Slam. For his part, McEnroe’s attacks on the net spring from some unmatched intellectual sensitivity, from a supernatural capacity to anticipate. His volleys were flashes of genius, the swift brushstrokes of an artist. 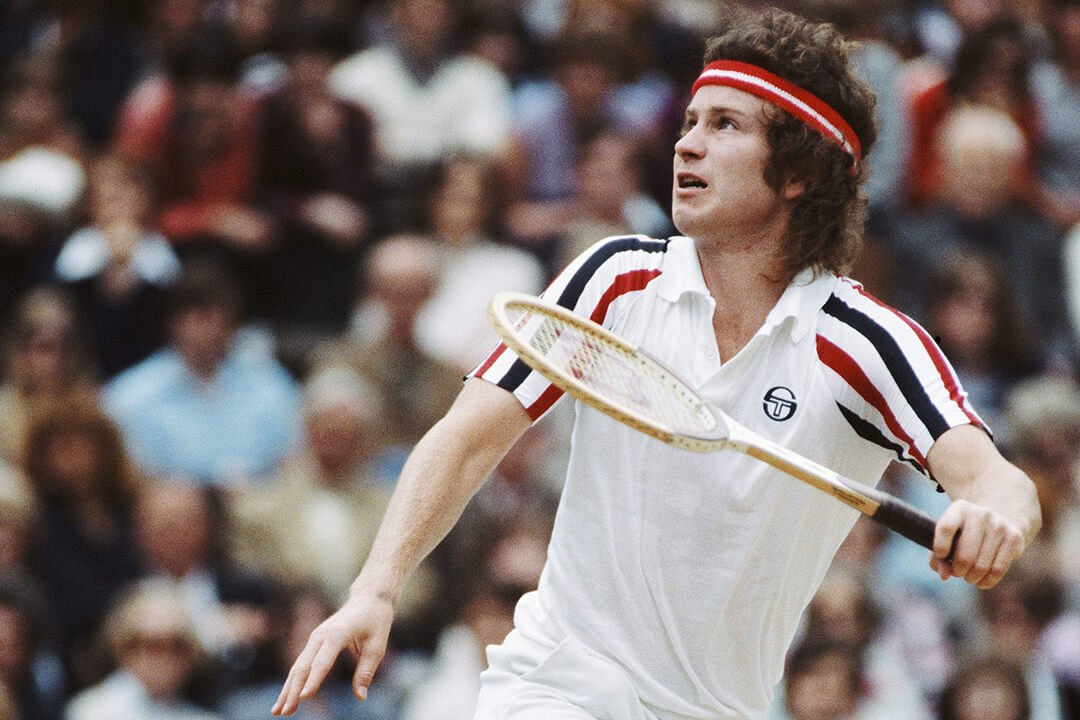 The origin and source of that unmistakable style of play was his unusual serve. Feet planted parallel to the net, pointing toward the line judge, as his back gently arched to achieve angles to put a contortionist to shame. David Foster Wallace wrote, “McEnroe’s weird splayed stiff-armed service stance, both feet parallel to the baseline and his side so severely to the net that he looked like a figure on an Egyptian frieze”.

Gianni Clerici, our own sublime tennis bard, watched John play a game when he was still a minor. Clerici watched him miss almost every stroke by a palms length. Clerici realized that, given time, that palm would vanish, elevating McEnroe to the ranks of the most incredible players of all time.

Clerici picked up the phone and dialed Sergio Tacchini, whose brand from Novara would end up dressing the young McEnroe. Shortly afterward, he would be rechristened ‘The Genius’. Legend has it that, after that call, Sergio Tacchini personally set up the meeting with McEnroe’s father in an unspecified London pub. This would be the beginning of the Italian – American union that would trademark his tennis style for almost three decades. 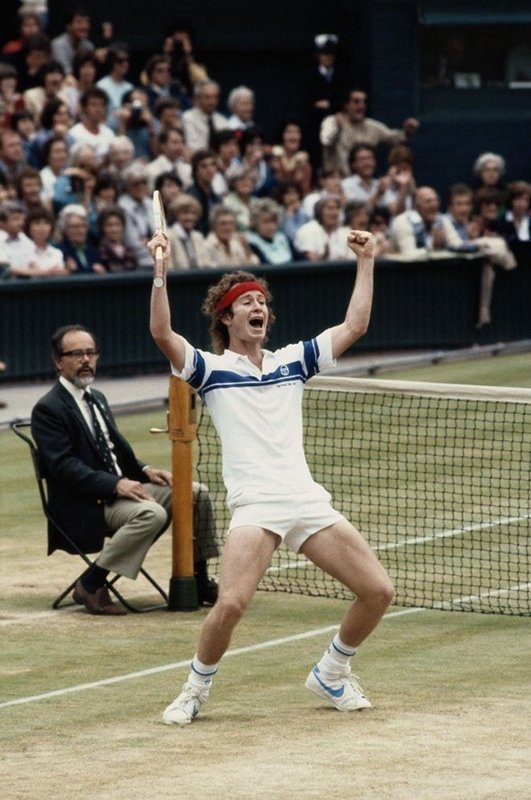 Tacchini and McEnroe ascended rapidly. To this day, their outfits remain fixed in our collective memory. Headband holding back rebellious curls, casual attire transcending traditional sportswear, catapulted into pop culture as young people in every corner of the globe followed suit.

When we talk about McEnroe, we inevitably talk about this. His impact on the public at large, his innate ability to divide fans (and not only) into critics or die-hard fanatics. The capacity of this genius from the Big Apple to split public opinion is second-to-none in the history of sports. Unconditional love or seething hatred, one extreme to the other, black or white. McEnroe’s overwhelming personality left no room for nuance or degree.

His approach to tennis was a challenge even to himself, to his own psychic balance. That balance would inevitably spin out of control, often to the detriment of helpless referees and line judges. 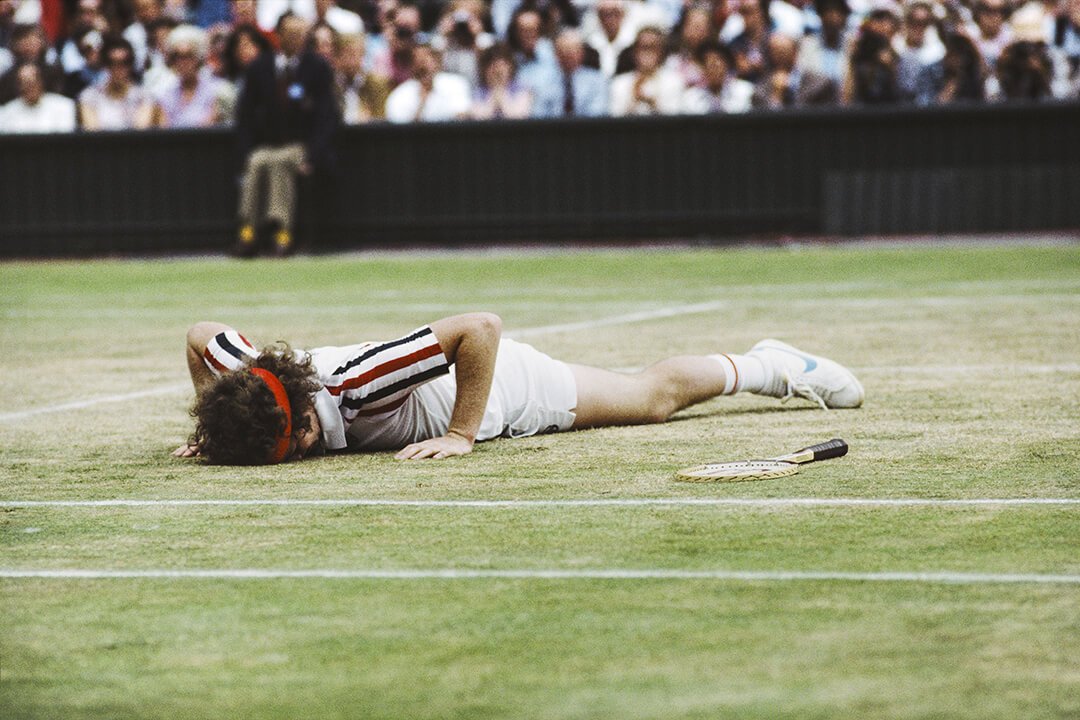 “You cannot be serious”, “I can’t believe this!”, “Please tell me!”, and “Answer my question. The question, jerk!”. We all waited for his verbal explosions. For many, they were agonizing, for others, exhausting. The purists were aghast, and the modernists in ecstasy. McEnroe’s quick temper demolished tradition and age-old rules of chivalry, giving rise to pop compilations of splintered rackets, shoved cameras, and humiliated fans. His matches were theatrical performances, shameless late-night monologues. ‘Superbrat’, a snot-nosed, histrionic man-child whose behavior brought about an entire literary genre.

“Peter Pan with a tennis racket. Every time he played at Wimbledon, the BBC muffled the court microphones quite like the Victorians covered up the legs of their pianos. Tom Hulce, who played Mozart in the film Amadeus, confessed he’d taken inspiration from McEnroe. Sir Ian McKellen, in his role as Coriolanus for the Royal Shakespeare Company, used McEnroe as his model for the rebel leader. A sulking, freckle-faced brat, in which the entire society saw itself reflected”, writes Emanuela Audisio, a long-time writer for Repubblica. However, this demeanor ended up overshadowing a significant side of McEnroe’s eccentric personality.

John was unbearable, but only with those whom he wished to be. He fostered few friendships in the circuit, but they were sincere, including a bond with his eternal rival form the north, the blond-haired Björn Borg. This genuine bond was recently depicted in the film “Borg McEnroe”. “Nobody understands friendship quite like John does”, the man from Stockholm revealed. To fully understand their unique relationship, we have to go back in time to the beginning of what would become one of the most captivating dualisms in the history of tennis and the world. “In 1977, I saw him here at Wimbledon for the first time, and a year later, he beat me easily in Stockholm, in my own house. Then in America, we played a couple of grand matches, and we started to respect one another. In those days, John went crazy on the court; one day I pulled him aside and said: ‘hey, cool down, you’ve got to have fun while you’re out there!”. 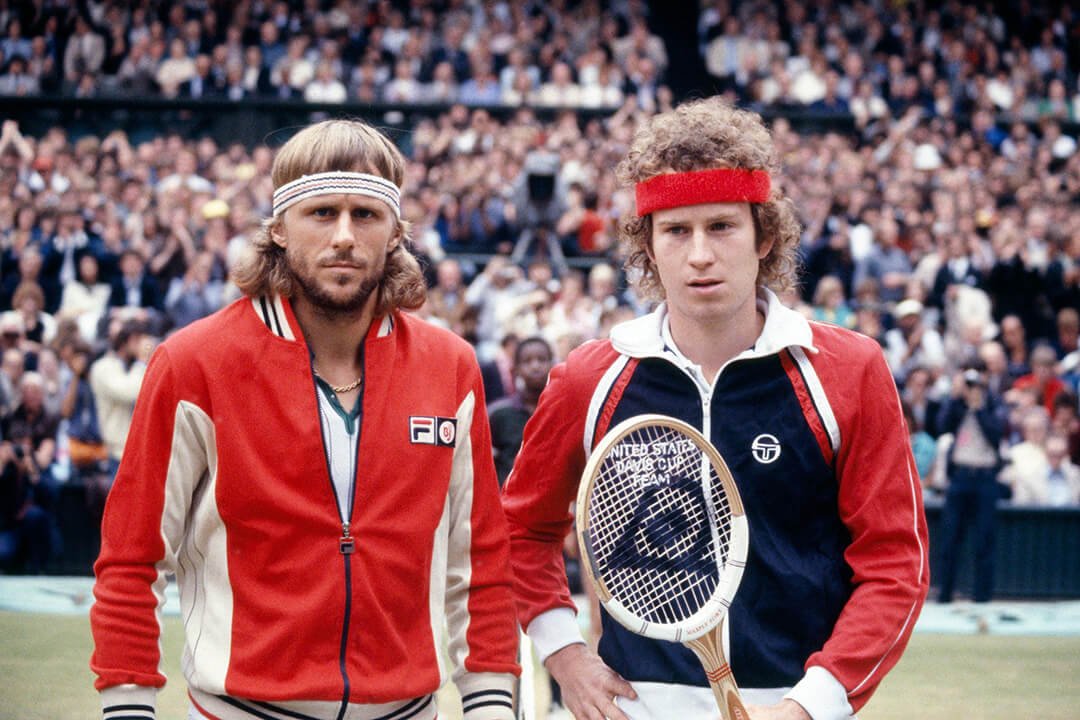 We can’t be sure whether McEnroe enjoyed playing all these years, but there’s no doubt that he played; or better, that he dominated. Listing his achievements at this point is a banal, well-worn trip down memory lane. 7 Grand Slam singles titles, 9 doubles (alongside the magnificent Peter Fleming), 77 victories in singles tournaments, with the same number in doubles, and 5 Davis Cups.

McEnroe was his trophies, but he was so much more. For the tennis world, he was a carnivore, a trendsetter, a pure-breed champion, an artist, a musician. In the words of Gianni Clerici, he was simply “the most creative player of his time”.