In the name of the bulls’ blood 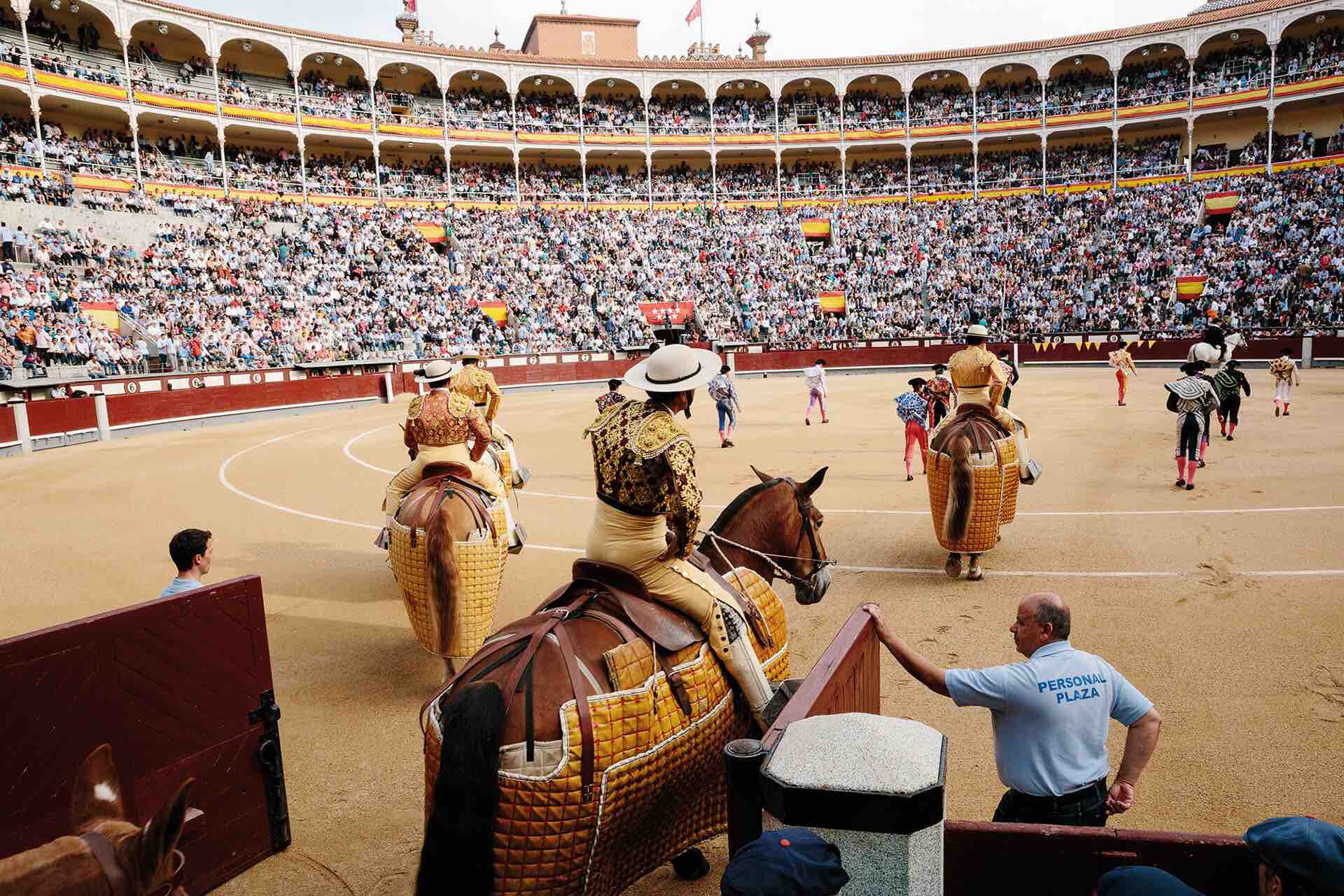 Bullfighting is an unequal struggle, marked by disdain and pathos

When a culture of death can’t be explained. Or even understood.

You don’t understand. I don’t understand. We’re too far away. What do you see? I see the shadow and I see the sun, I see closed doors and I smell the dry fumes. To call it a bullfight makes no sense, it’s in- correct. That’s what the people outside the plaza call it. For those who are inside, it’s different – they go to los toros and see the whole of the bullfight only in that one fatal moment. That one moment. It’s all impossible to explain, because we stick to our own view. But you don’t understand, and I don’t understand why you don’t want to understand. I hear long breaths that become short, hearts that stop for an instant and then continue to beat, hearts that have to stop in that instant and then beat no more. Since 2012, in Catalonia bulls are no longer killed. 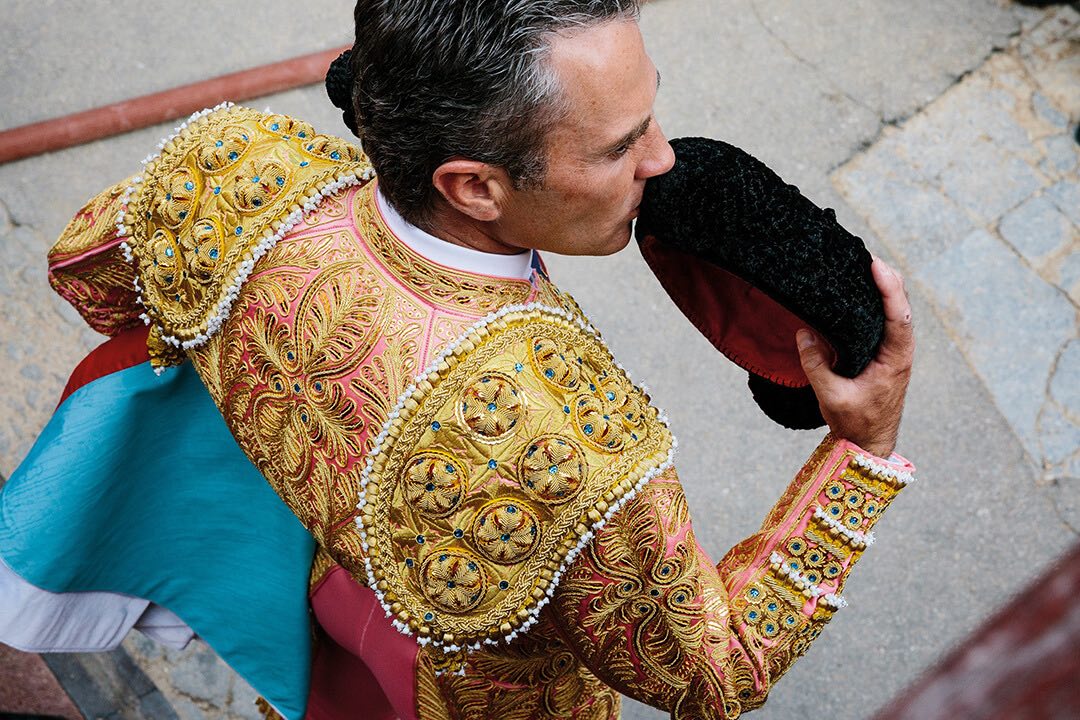 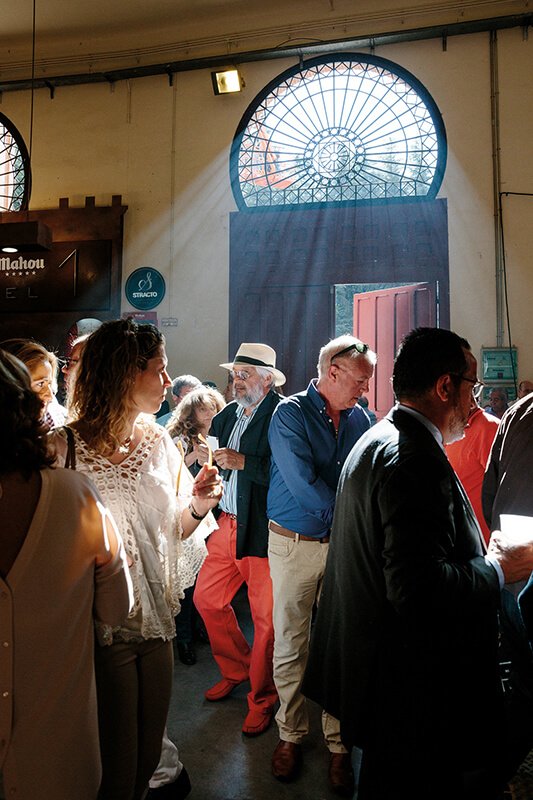 They voted against this barbaric practice. But Catalonia isn’t Spain, and finishing with the past means finishing with Madrid. In the name of the bulls’ blood, people defend the popular identity. Too easy. Andalucia would never vote for the end of this barbaric practice, Andalucia is in Spain. People don’t want to ban bullfighting, they can’t. And those who eat tons of pipas on the steps don’t want to ban it, so they can’t. They eat pipas and spit the pieces of husk over their feet. They eat nervously and drink alcohol. They’re waiting only for the rabo, the bull’s tail. They experience a form of social participation that becomes cultural and ends in morphing into catharsis. These are Spaniards. It’s pointless, you can’t understand. You’re not Spanish. 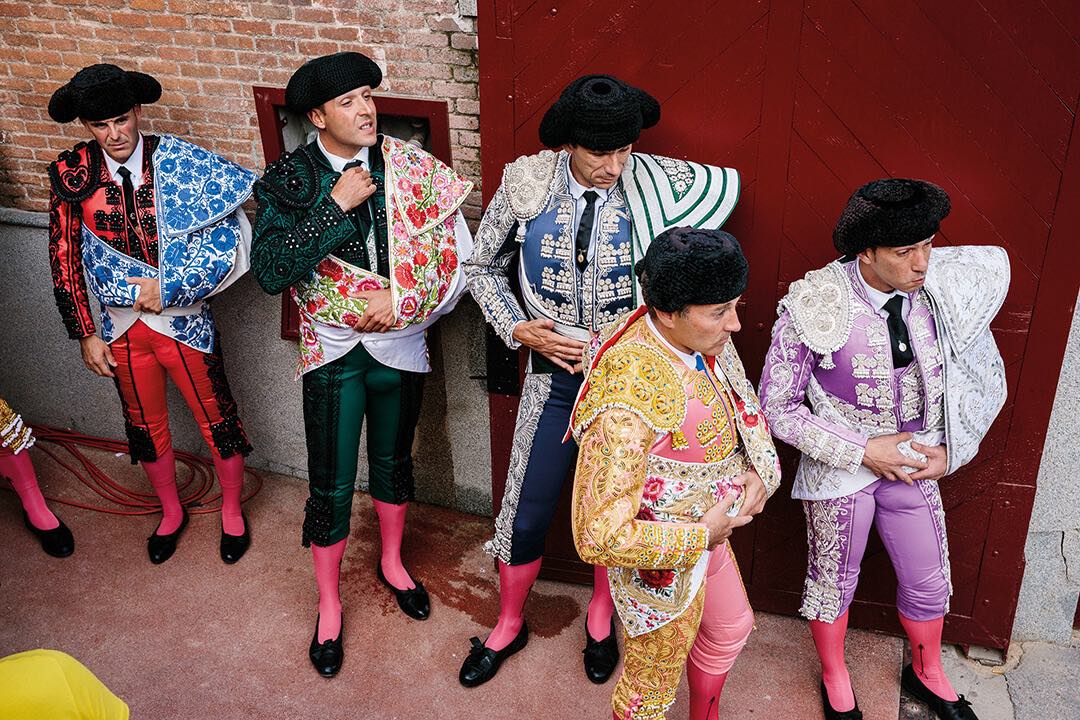 The toro de lidia is an animal that can weigh up to six hundred kilos: born and raised to fight. It’s a Spanish bull. Without all this, it wouldn’t exist. And it wouldn’t stand snorting and bowing its head while the wooden gate of the toril is about to open. There, at that moment you cheer for him. As is only fair. You see him released into the arena and you already know that he won’t make it. First mistake, he can make it. And you hope he will. The others don’t, they hope that courage will win. That’s the point. And it’s here that the tercio de varos begins, with the toreador testing the animal’s power by goading it with the capote, a large cape that is pink on the outside and yellow on the inside. The bull charges, the matador feints. And you don’t understand, but I admire both of them. Then the picadores enter on horseback with their vara de picar and prick the gasping black mass, and weaken it. Too easy, you say. But I have respect for the beast that charges the horse, wounds it and, in doing so, sustains fresh wounds from the horseman’s pike. That’s why I whistle, because the bull’s bravery must be respected, it’s not fair to take it out on him just because the picador isn’t able to strike and ride away. 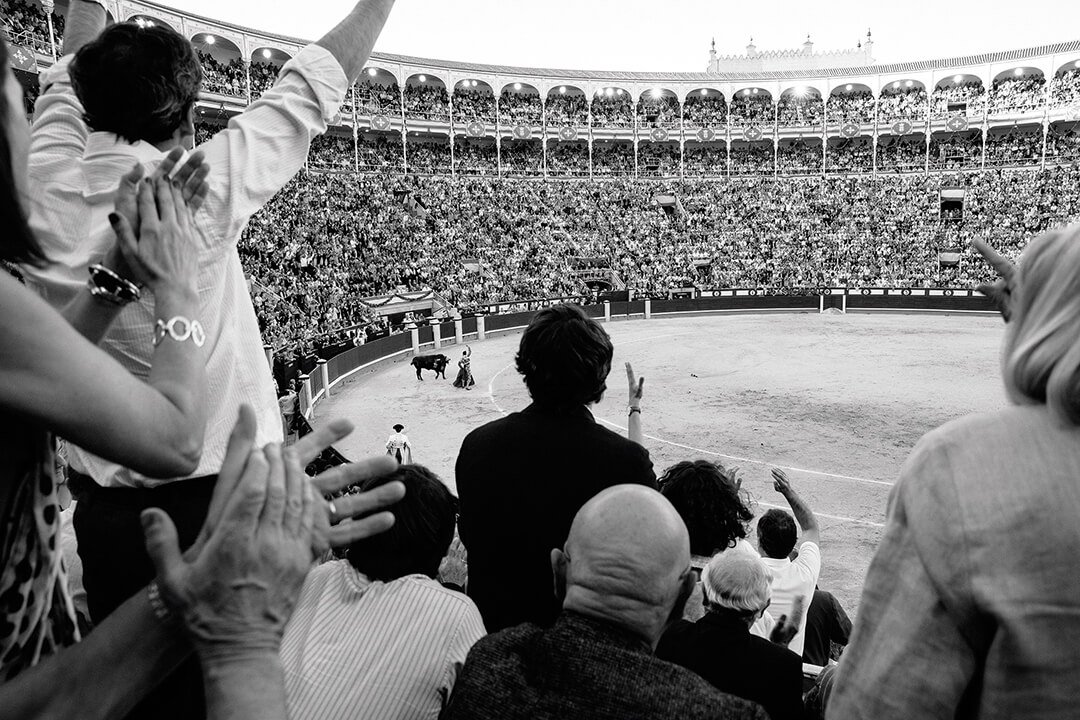 You bought a ticket in the sun, because spending a lot didn’t make sense for this garbage. I bought a place in the shade, because it’ll take them a long time to beat six bulls and because I’m Spanish: awful as it is, I’d like it to go on for ever. At the tercio de banderillas I’ve seen just about everything, but I’ve never seen that. Three ‘characters in search of an author,’ with two wooden rods seventy centimetres long, tipped with a barb that measures six centimetres by four. They goad him, they make him angry, they challenge him and they wound him. The rod falls away from the metal tip and remains attached to it by a string that sets the colours dancing on the bull’s back. And he gets angry. Really angry. And so do you. But I see him still alive, and I see he’s bad, I see he’s damned dangerous. And enormous.

At the tercio de muerte, the job is done. The bullfighter takes the muleta, a red cloth, and he manoeuvres the fearsome animal round in circles. Ready to drop from fatigue now, tongue hanging out and legs ready to buckle. He has only one, desperate, desire: to impale that damned red rag dancing in front of his eyes. And whoever is flourishing it is fully aware of this, and intent on ceaselessly wearing the animal down. It’s never-ending, but then it comes to an end. Once … olé … twice … olé … three, four, five, six times … oooooolé! The bull bleeds, and the bullfighter doesn’t want to bleed. It’s a dance of death where nothing is spared, with no hesitation and with only one winner. Who doesn’t necessarily stand on two legs. Reprieve, they call it. And if the public calls for it, the bullfighter has no choice but to spare the bull’s life. It happens when the animal fights with particular ferocity and aggressiveness, when the animal doesn’t want to succumb and shows no sign of yielding. In that case, the public seated on the steps call for the bull to be spared and he wins. And the bullfighter lives. Which doesn’t happen, when the muleta isn’t enough to wrongfoot the bull and his fearsome horn strikes his foe, who is impaled and killed. But when the estoque is plunged between the animal’s shoulder blades as far as the heart, well … then the man wins.

The bull teeters, his sight grows dim, the public applauds, the killer waits for the thud and the sand trembles un- der the crash of the slain animal. It’s over. You have a sense of horror, of pity and of shame. I’m Spanish. I ask the judge for the prize: the tail, when la faena (the work) is well done. And when it’s all over, I continue to be Spanish, I continue to wait for los toros, I continue to bring my son. While you continue to think that it’s all absurd and are sorry you’ve been part of the collective folly. But you don’t understand. And I can’t get you to understand. 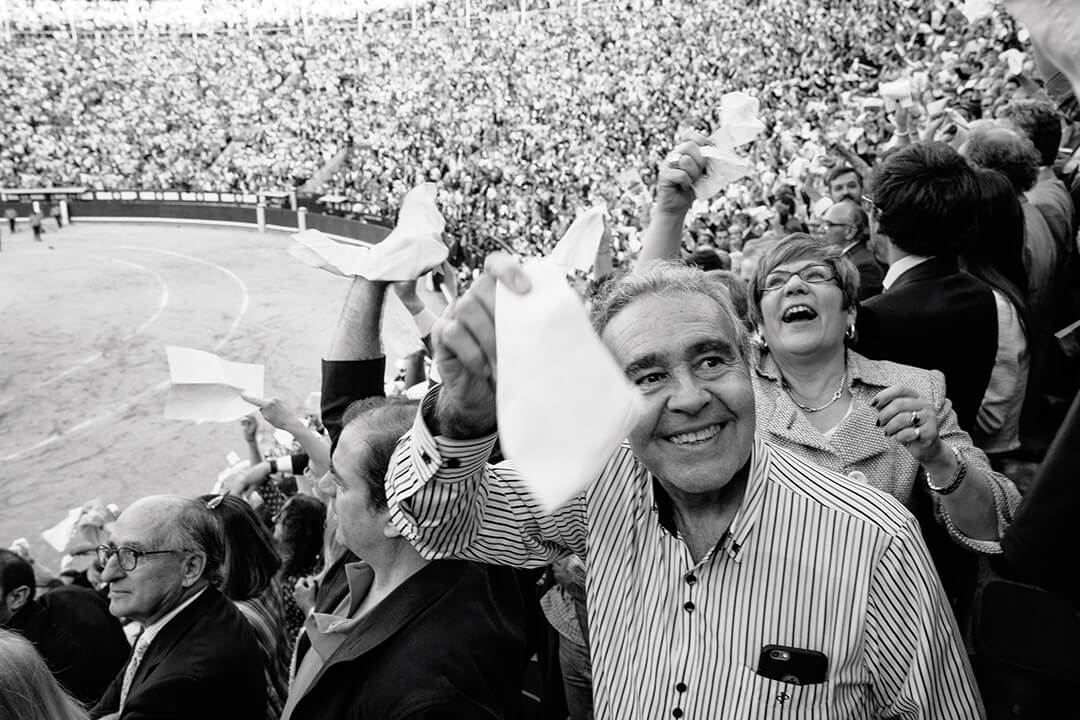 His soul dies with me

Bullfighting is an unequal struggle, marked by disdain and pathos.

The bull never dies immediately. The bullfighter slips that grotesque rapier between the shoulder blades and everyone’s wish is that it will reach the animal’s heart. The bull teeters, looks at the red muleta. He looks at the red muleta and teeters, his tongue hanging out in all its weight as he sways and gasps for air. The puyazos have weakened his neck muscles and forced him to keep his head down. His sight dims progressively, he looks at the red muleta. His desire to live wavers, his tongue is heavy. His eyes no longer see anything. His front legs buckle, his face hits the sand, his tongue is no longer heavy. He no longer teeters. He’s no longer alive. The six hundred kilos are claimed by death: it’s all over. The crowd cheers. I see only the mulilleros entering the arena and hooking up those black muscles and dragging them out behind three colourful but sad mules. 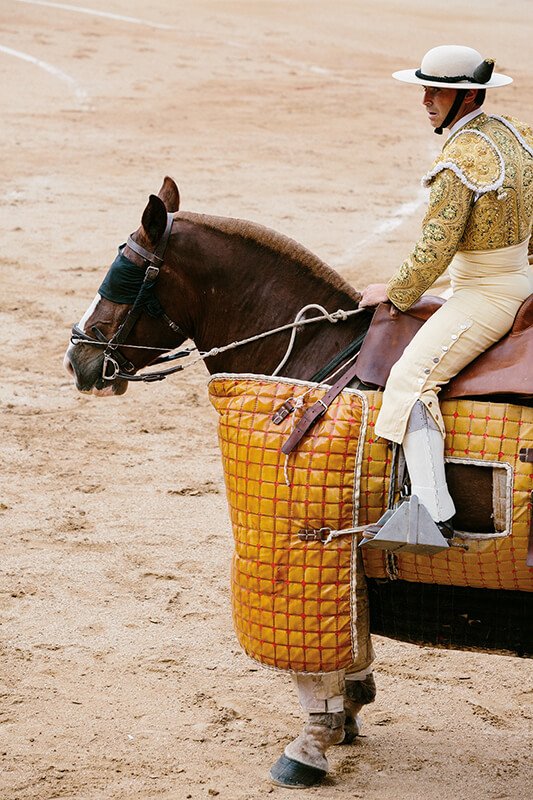 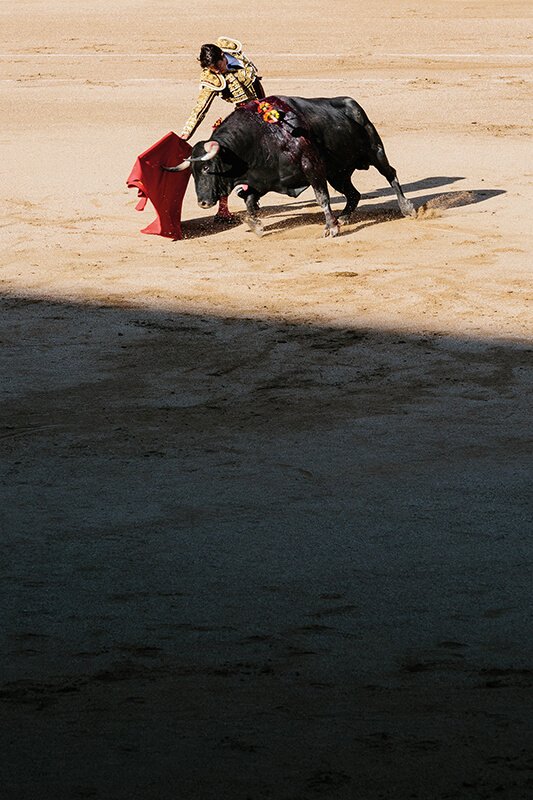 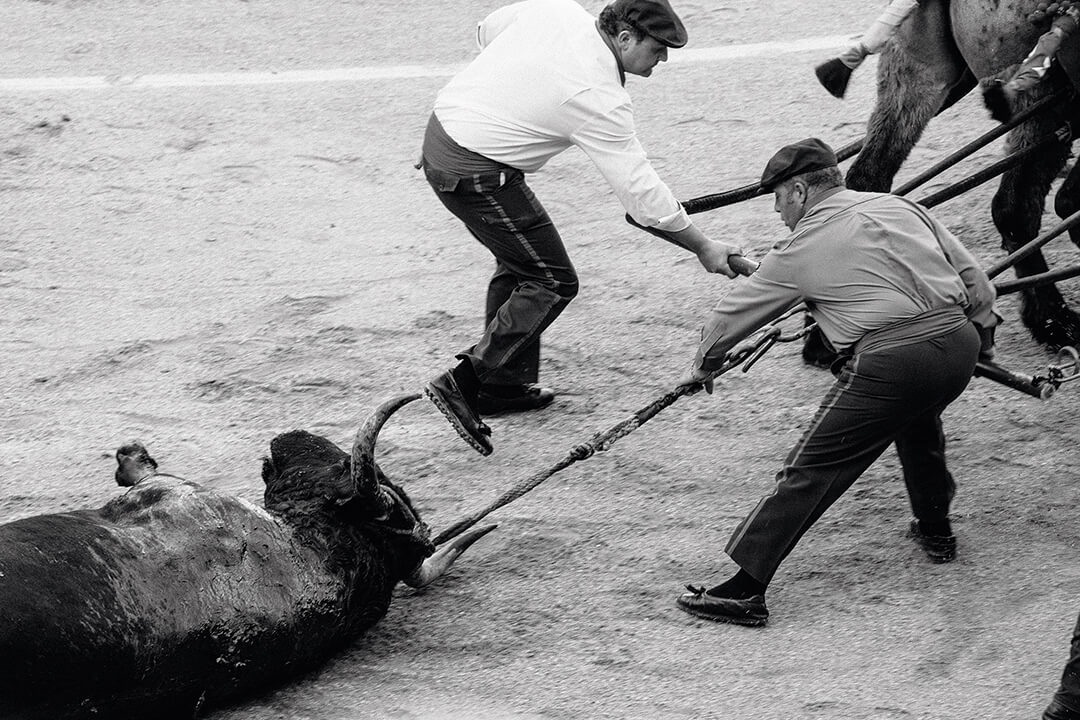 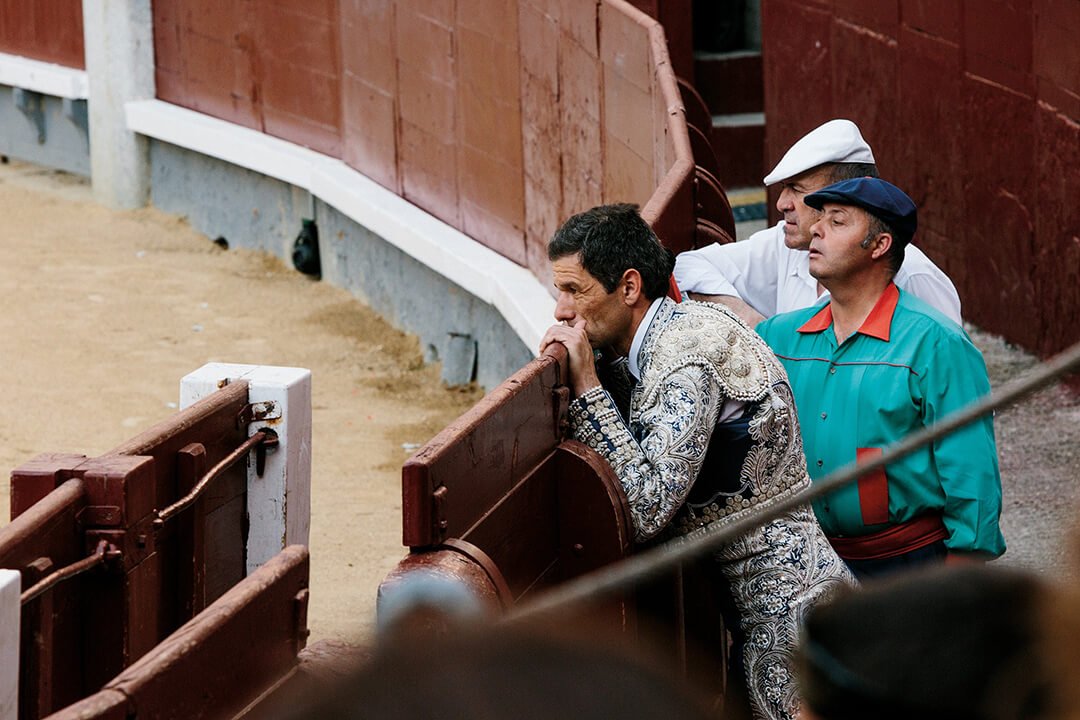 I can only see them. They don’t have any type of gold costume, glamorous silk or soft embroidery; only baggy pants and short-sleeved shirts. There are four of them and they ride three silent animals. Behind them, what was once an embodiment of strength, of violence, of life. Why? I wonder. I look at the mules. In the arena, on the steps, in the  plaza de toros. Why kill the bull? He has no hope, everyone knows this. But everyone wants to believe that he does. Absurd. When he doesn’t fall under the coup de grâce, they attack him with a shorter dagger and the people don’t like that: you have to kill him right away! A pathetic form of pity that becomes disgusting, when the matador still can’t finish the job. So the peones enter and they finish him off. The crowd whistle. They yell for respect for the animal, literally to the same extent that they were clamouring for his death no more than a few minutes before. A handful of peones, the people with the least compassion of all.

I can’t bear this corrida de toros. I can’t bear it when people explain to me that the animal was well treated right up to the moment of its death. Uncontaminated spaces, they say, and an abundance of food. Not the typical slaughterhouse, or years of fattening up with steroids beforehand. Yes, you’re in luck if you’re born a toro de lidia. You live four years, before being brought to fight and, up until that moment, you’ve never seen a matador, not even with binoculars. You live, more or less, as if you were in the wild. What was that proposal made to Achilles, son of Peleus? ‘Do you prefer a long and anonymous life, or a brief and glorious one?’ He chose to die young. The bull dies and that’s that. For the cruel enjoyment of those who have paid for the ticket, as the merciless and senseless centuries have passed. But, according to them, it’s been a fun time. And extremely sensual. The women faint as they witness a concentrated expression of old-fashioned machismo. It’s a tiptoed assassination, but it doesn’t matter. All that matters is history, defended tooth and nail even when modernity is knocking at the door. Pushing the muleta aside, shows the world how pointless the barbaric gesture is.

The Spaniards live in the past, hoping that this fiesta will always have a future. Sticking to Ernest Hemingway and his absolute desire to write about bullfighting. They won’t be able to give a literary halo to this squalid serial novel. I keep myself well away from the slaughter, I don’t want to see tails and ears given as trophies. I don’t wave handkerchiefs, of any colour. The bullfight is a question of culture that has nothing to do with the culture of respect towards living beings. The bull is an animal for slaughter. It’s taken away, skinned, boned and cut up: ready for hanging, as the meat seems to keep well. A simple freezer section product.

That in rare cases can be granted a stay of execution and be saved, but only if he has fought valiantly. If it wasn’t so tragic, it would be laughable! The saved bull is immobilized, then disinfected and freed of the barbed banderillas. Under anaesthetic, the wounds are cleaned, drained of fluid and stitched up. If the not so imaginary invalid survives the first two days, he will return home and become a stud. To give the world other bulls that will offer further entertainment by continuing to suffer. A perfect world would be two contestants with an equal chance of winning and losing. But this is the sad world of bullfighting and the bull doesn’t always die immediately.

And when it does happen, his soul dies with me. 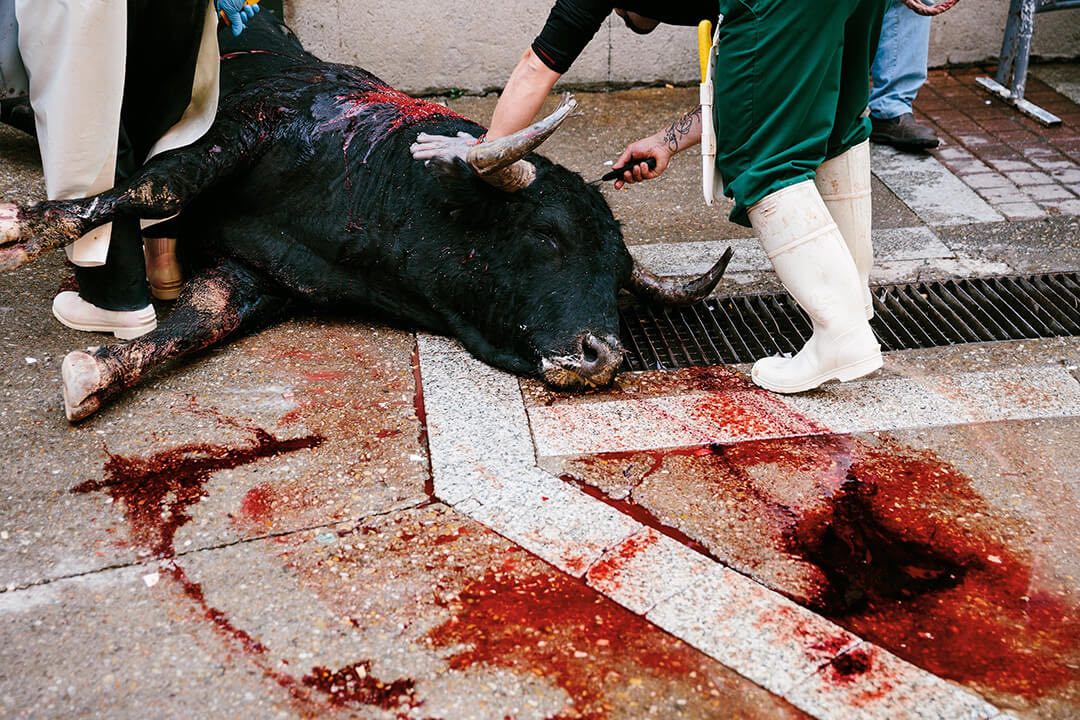