Fred Perry, the story of a revolutionary tennis player 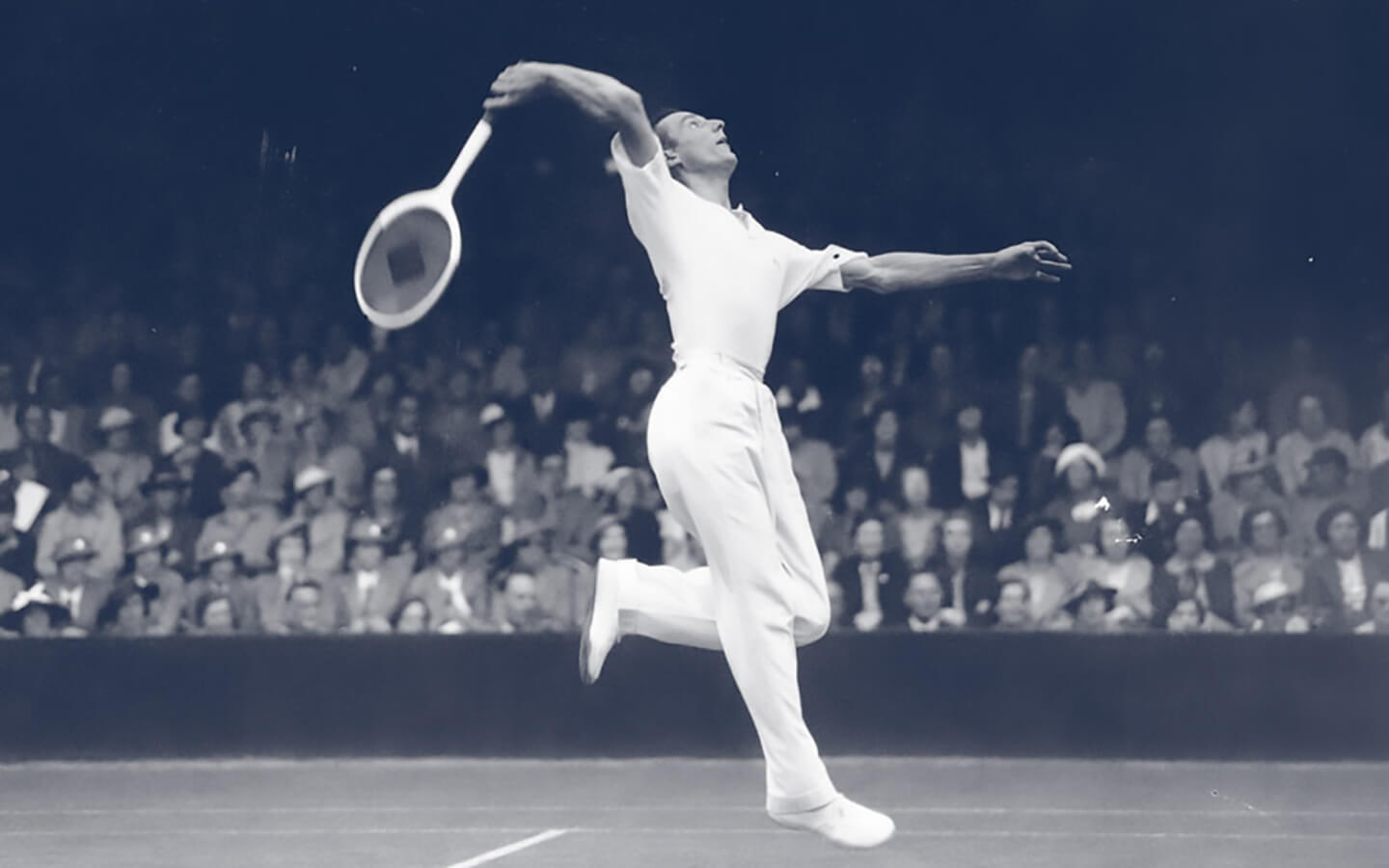 England, early 1900s. After the tragic death of Queen Victoria, her son Edward ascended to the throne. The society that developed during his reign had a strong hierarchical stamp. People were basically forced to accept their economic and social status. The British élite began to feel an increasing interest in sport, resulting in a small but significant revolution in the world of fashion.

In Stockport, a few miles outside Manchester, far from the London gentry and their new leisure activities, the future rising star of British tennis, Fred Perry, was born. The family he came from had rather modest origins: his father was a cotton spinner, politically active as a trade unionist and socialist. Consequently, getting his son to play a sport like tennis, which was reserved only for English high society, was out of discussion.

As the years went by, his father’s political career took a turn for the better, so much so that the family moved to Brentham, a small suburb not far from London built by the Co-Operative party. It was exactly during his years in the garden city of London that Fred was bewitched by tennis. Seeing the richest and most influential people in England enjoying themselves with a racket in their hands led him to think that tennis could give him the chance to turn his life around. 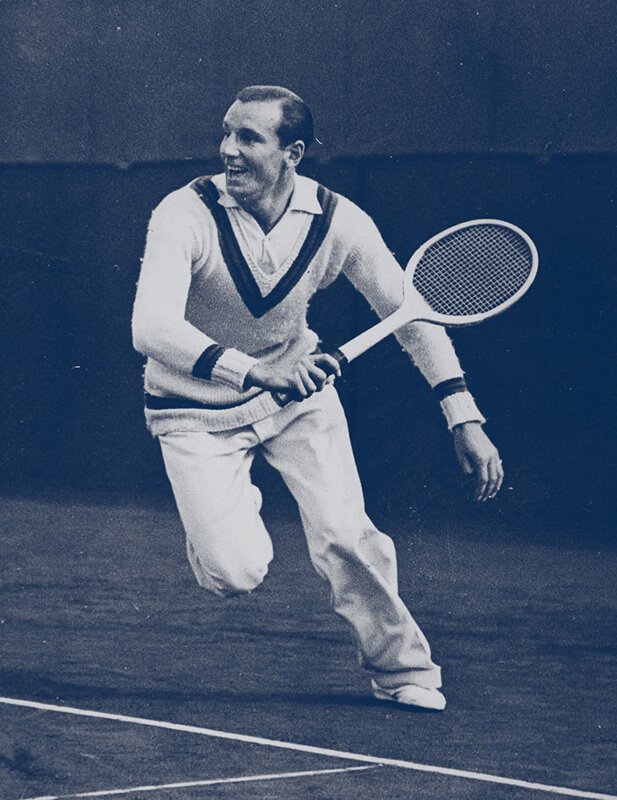 As tennis clubs were reserved exclusively for the aristocracy, Fred Perry started with the most humble and popular version of tennis, table tennis. He seems to have an innate talent. He feels the rhythm of the ball like no one else. Moreover, playing an individual sport gives him the opportunity to be in complete control of his own destiny: a considerable nuance for someone born into a social context where personal freedom is often restricted.

Although he did not train regularly and only participated in one local tournament, in 1927 Ivan Montagu – coach of the English national table tennis team – decided to include him in the team for the World Championships.

A powerful and precise forehand. Mind-blowing effects. The young man from Stockport defeated all the best athletes present with disarming ease, reaching the top of the podium at the age of 20. After winning the last world championship in 1929, he announced his retirement from table tennis, promising to win the Davis Cup within the next four years. 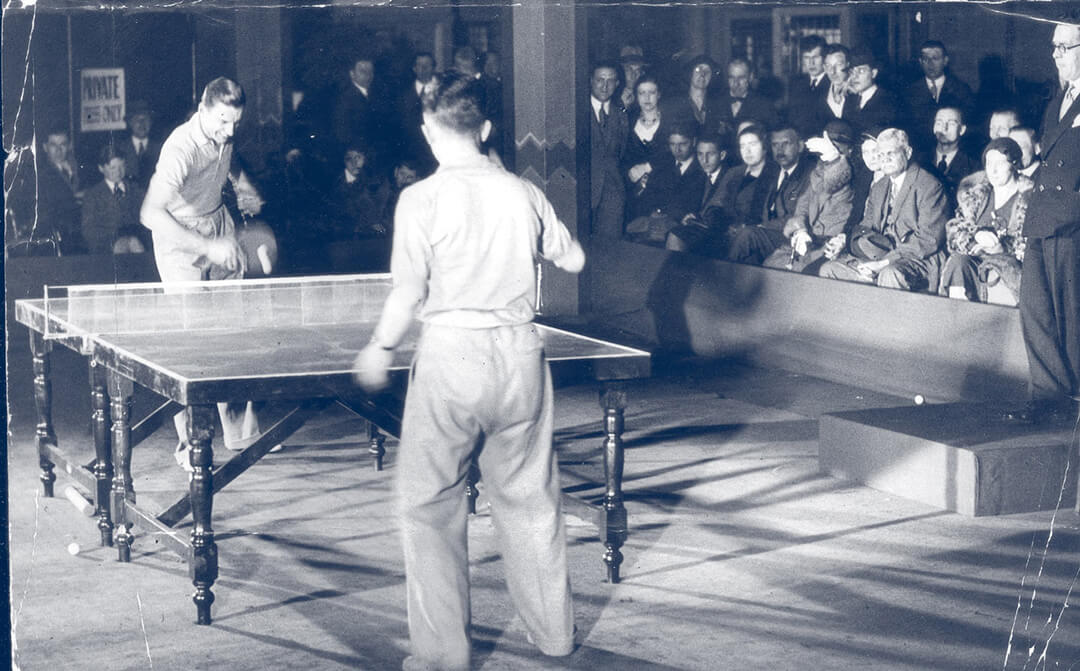 HOW TO REVOLUTIONIZE THE ENGLISH TENNIS SOCIETY

In 1929, tennis was still elitist, however, Fred Perry was determined to keep his promise. With the support of his father, who saw his political ideals of meritocracy and social fairness in his son’s potential tennis success, Fred started playing in tournaments all over the UK. He wanted to assert himself as a sportsman and as a man, showing everyone that economic wealth was second to the desire to stand out.

1933, Paris, Stade Roland Garros. The United Kingdom challenges France in the challenge round. More than 20 years after the last British success, Fred Perry kept his promise and won his first Davis Cup. In the same year, another tennis player made headlines under the Eiffel Tower with an entrepreneurial idea that have been successful for centuries. After the first prototypes worn in 1927 in Forest Hills, René Lacoste officially launched his iconic clothing brand. 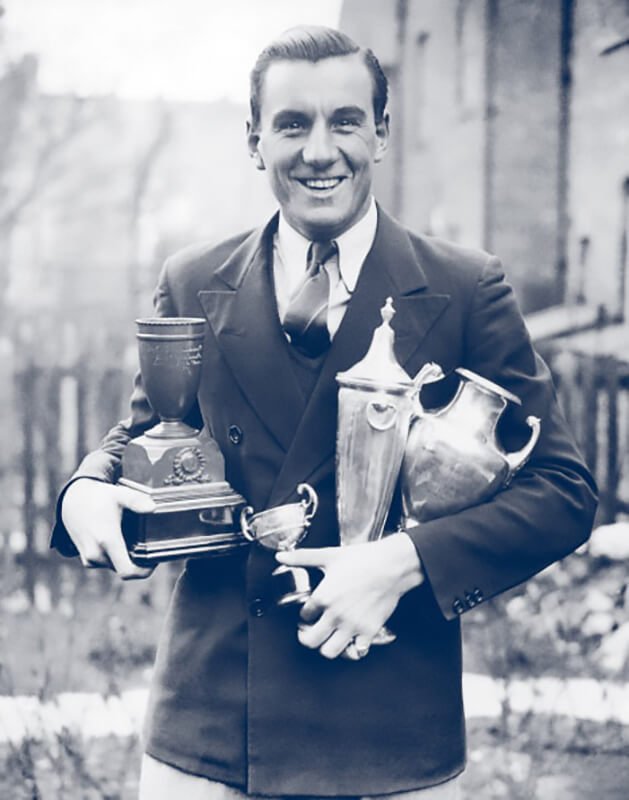 The oldest tennis event in the world. The only one to be played on grass. The green and purple. The snow-white uniforms. Wimbledon is just unique. The pressure you feel in that green rectangle cannot be compared to any other stadium in the world. Add to that the fact that you are an English athlete trying to win a trophy that has been absent from Her Majesty’s country since 1909. Ironically, the same year Fred was born. The Wimbledon final that year pitted the defending champion Jack Crawford, an Australian who was much admired by British people, against Fred Perry, a British athlete who was often criticised by his own public due to his social background and an unrefined style.

6-3, 6-0, 7-5. Perry silenced his detractors and was crowned the winner. The triumph of the working class in one of the events that most represents English nobility.

Despite an impressive record of victories, even in the international circuit, the British Federation struggled to recognise him as a professional athlete. In those years, the distinction between professionals and amateurs was clear. Since tennis was considered an art form and not a job that could be financially rewarded, the only reward was sporting glory. Perry, who sees not only success, but also independence in money, decides to move to the United States. The American culture, where meritocracy and fame go hand in hand, is much more akin to Perry’s ideals. 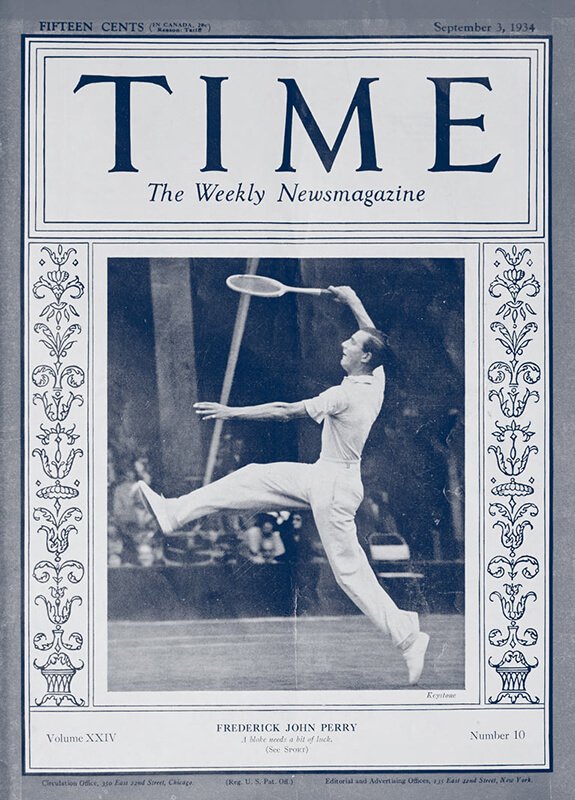 FROM GRAND SLAM TO CORPORATE SUCCESS: THE BIRTH OF THE FRED PERRY BRAND

He bought the Beverly Hills Tennis Club and a few years later was approached by Tibby Wegner, an Austrian ex-footballer with a similar business idea to Lacoste. They modified the transalpine model, resulting in the first Fred Perry polo shirt in 1952. The logo, a laurel wreath embroidered on the chest, is the emblem of victory. The effigy of someone who, starting from one of the lowest levels of the English social pyramid, achieved a double success: sporting and economic.

At least sixty years ahead of its time, Fred Perry is a forerunner of modern marketing campaigns. He presented his polo shirts at Wimbledon and gave them away to everyone. The public responds positively, so much so that even celebrities such as John Fitzgerald Kennedy are seen wearing the laurel wreath on their chests. 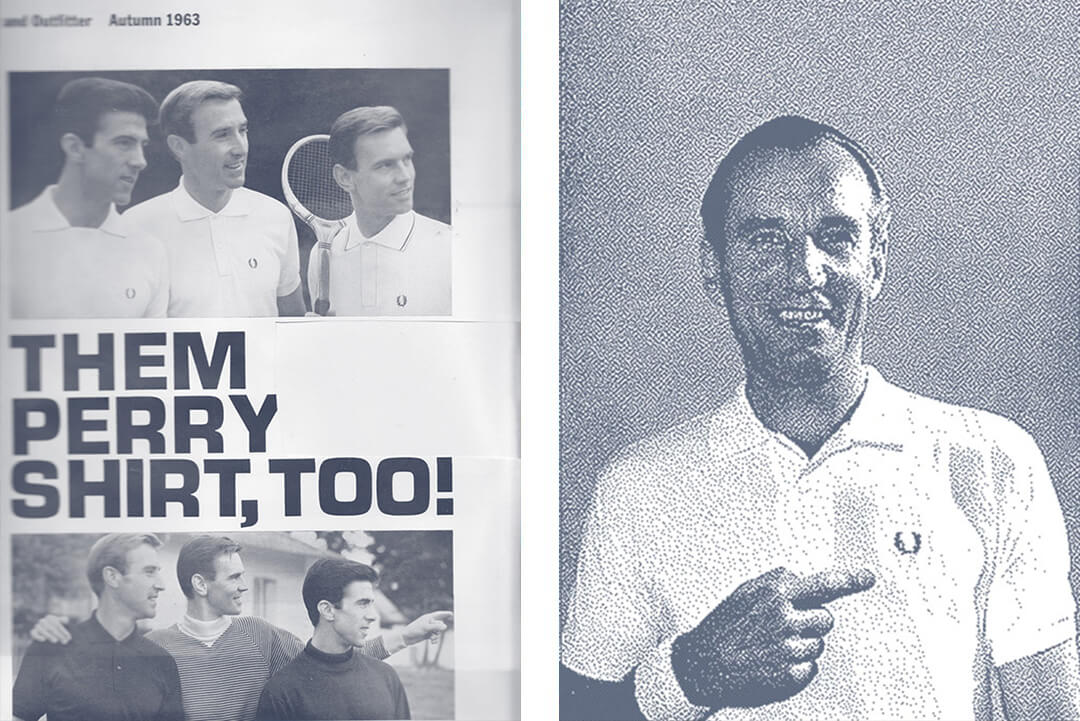 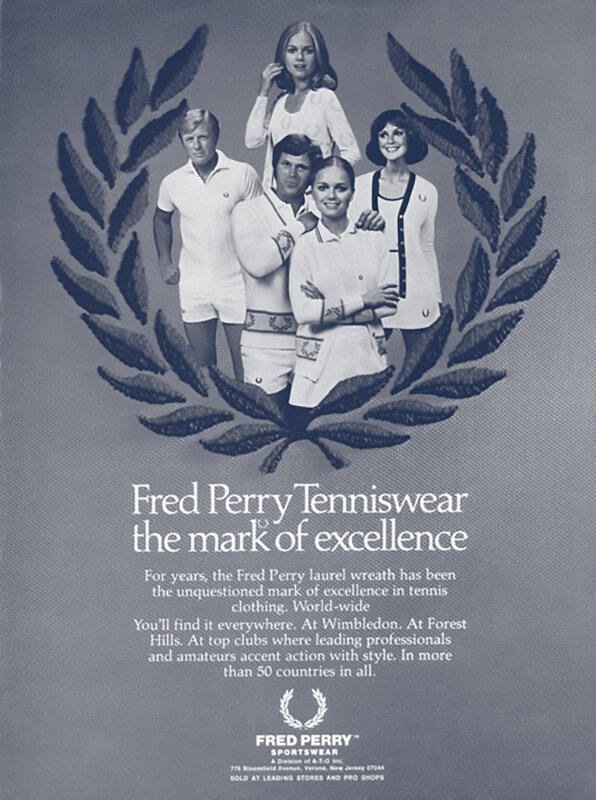 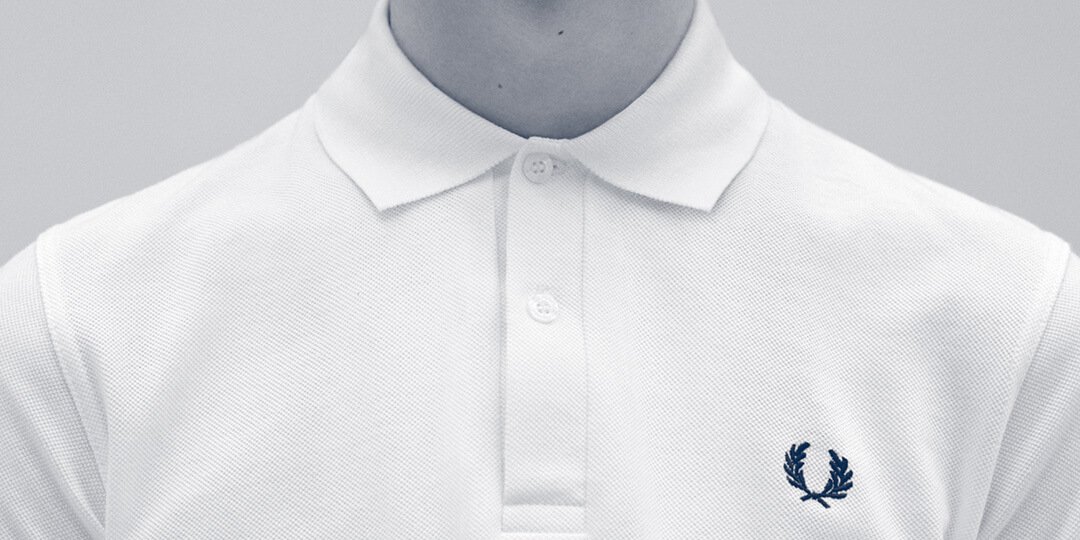 “By now I am aware that they know me more for my polo shirts than for my tennis career”. In just a few years, the success of his brand is there for all to see, Perry himself sensing its worldwide fame. Although he has become a fashion icon, the tennis world has not forgotten his achievements. He was invited to crown Bjorn Borg for his victory at Wimbledon in 1978. Few years later, a life-size statue of Fred Perry was unveiled at the All England Club for all to remember.

On the day of the unveiling, he declared, “Wimbledon was the most important love story of my life.”

In 1995, Fred Perry went to the hospital in Melbourne after a bad fall during the Australian Open, a tournament he had won in 1934. He died a few days later at the age of 85.

He inspired and continues to inspire every generation. His polo shirts, as iconic as Lacoste polo shirts or Stan Smith shoes, are the last, eternal gift of a man who reminds us the importance of being the architect of our own destiny.